I had planned on doing a post about linear dynamical systems and Markov chains, but that will have to wait. In the mean time, I have been reading about linear transformations and change of basis. This took me a little time to wrap my head around; I’m still working on it. One of the best resources I have found on the subject is here.

My discussion below follows this one very closely, but I have altered the notation slightly, as I find it helpful to express things as unit basis vectors

. I will also use

This has been a useful exercise in

, which I have also been learning about. If you want to get started with

Note: This is *not* how you do regular

which is slightly more complicated, but it does allow you easily add well-formed math symbols to blog pages, which otherwise would require the use of either description or simulation in text, or images. 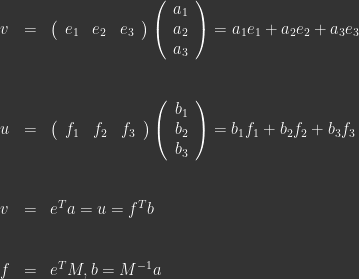 can be used to express the coefficients of the transformed vector

in the set of basis vectors 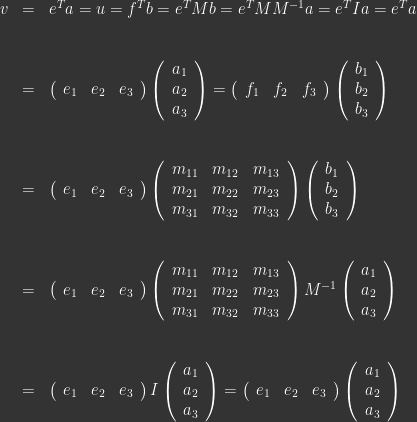 Note that the columns of

can be seen as new (transformed) basis vectors

when the standard unit basis vectors

are used to formulate the

is the transforming matrix for unit basis vectors

As you can see, the two matrices

cancel each other out, and the vectors

are equal to each other – there is a difference in basis (

), and, for that reason, it is necessary for each vector to have different coefficients.

But the vectors are the same; they can be used to describe the same locations in a shared, common physical space, assuming you know the relationship between the two sets of basis vectors

The point is that it is possible, using matrix

and its inverse, matrix

to define a new set of basis vectors and to define a new set of coefficients for those basis vectors to be used to describe the same physical location. This can be useful, for example, in translating between systems that exist in the same physical space, such as the interior of a spacecraft orbiting the earth, and the earth-centered space around it.

Also, as you can see, the tools provided by

make it possible to describe all this in a much more elegant and instructive way than would be possible otherwise. See my previous blog post on the subject of

for additional details about this.

Here is an example in 2D, using, again, the standard basis vectors

are equal to each other, but make use of different sets of basis vectors and coefficients. We will also take a look at transforming the vector

; note that the vectors 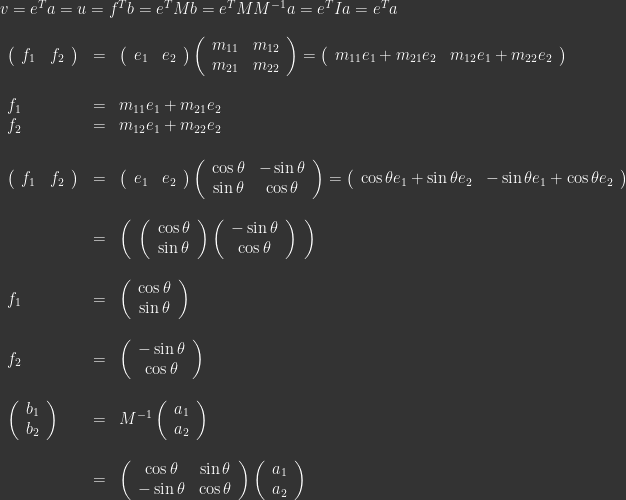 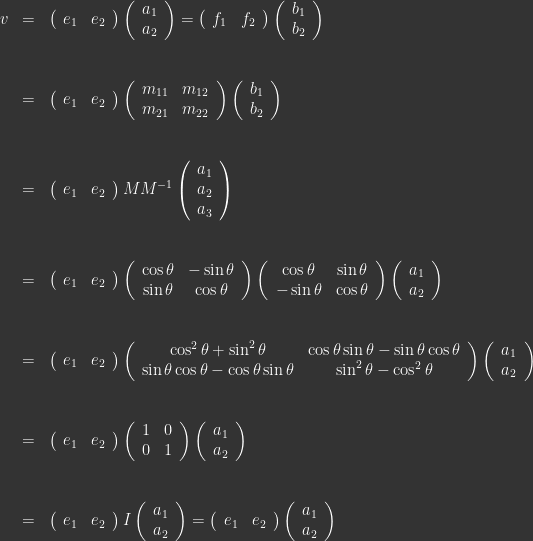 rather than the standard unit basis vectors

have been transformed by the

, which is the graphics package I used to generate the coordinate and vector images above), I’ve attached a downloadable pdf below.